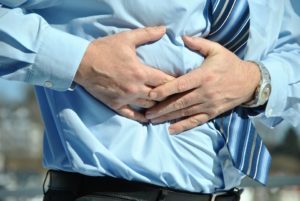 Coconut oil contains a lot of MCTs, small molecules which are easily and rapidly digested. It is wise to replace long chain fatty acids such as corn, sunfl ower, olive and soya oil by coconut oil for people who have digestive problems. Especially older people, small children and people with a nervous nature. (13) But also in cases of spastic colon, colitis ulcerosa, gastritis, diverticulosis, chronic intestinal infections, Crohn’s disease and constipation. Fewer nutrients are ab sorbed and the body will be burdened with toxins from the sick intestine, which constantly compromise our vitality. Fast- ing, detoxing and coconut oil to the rescue.

Pharmacists J. Graedon and Dr. T. Graedon state the follow- ing: ‘Coconut macaroons (cookies) are better suited for people with Crohn’s disease than any other medicine’. (86) MCTs will ensure that nutrients are absorbed faster and easier by the intestines than LCTs. (87). The longer the chain, for example EPA and DHA from fi sh oil, the harder the intestines will have to work to process them. The more AA fatty acids (meat), the more infected the intestine will become. A diet rich in polyunsaturated fatty acids (for example fatty fi sh, sunfl ower oil, linseed oil) will burden our intestine the most. (87) MCTs from coconut oil will contribute to a better absorption of nutrients in people whose large intestine has been removed in part or as a whole (88). This is due to the fact that MCTs are tiny fat molecules. A Belgian study confi rmed that vitamin E in fat formulas containing MCT is absorbed twice as well as fat formulas that exclusively contain LCT. (89)

Healthy intestinal flora are achieved by eating unrefined food that is reach in fi bre and untreated vegetables and fruit. Other foods that contribute: Fermented food such as sauerkraut, other fermented vegetables such as some pickles, inuline-rich vegeta bles such as salsify, Jerusalem artichokes and onions, kombucha, kefi r, chutneys, raw cheeses, live yoghurt, fermented cereal pudding, some wines, beers and vinaigrette. Naturally these should not be pasteurized or heated or the good bacteria will be killed. 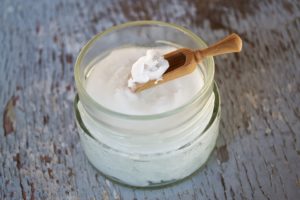 Coconut oil can make a substantial contribution to prevent and alleviate infections in the digestive tract. These infections often are partly due to the body’s reaction to infecting organisms. A British study with tests on mice concluded that coconut oil can drastically reduce the risk of infections and that this oil can be used therapeutically for acute and chronic infection diseases. Coconut oil can be especially useful for patients suffering from Crohn’s disease, an illness whereby the intestines are infected or in treating colitis ulcerosa, a similar disease, which also infects the large intestine.

Research has shown that the anti-inflammatory components in coconut oil can reduce the irritation of the intestine. Moreover the anti-microbial components of coconut oil will combat viruses, bacteria and potential funguses, which burned the intestines and contribute to it.

People who suffer from gluten allergy (coeliakie) often suffer from chronic infections and the mucous membrane of their intestinal wall is often damaged. This reduces the absorbing capacity of the intestine, can lead to diarrhoea and a lot of pain. Coconut oil and coconut products will protect the intestinal wall with their medium chain fatty acids and combat reactions to infections. The anti-inflammatory function and the partly antibacterial, antiviral and anti-fungal function of this medium chain fatty acid is exceptionally healing for people who suffer from coeliakie.