Traditionally fermented soy is good for you: use only authentic soy sauce, natto, miso and tempeh 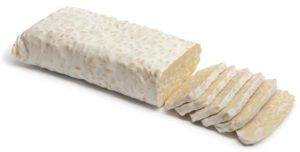 Vegetarians often consider soy as a super food. Unfortunately, the health benefits of eating products based on soy are highly controversial. This is partly because soy is a bean: beans are only nutritious for humans when they are properly prepared.

Americanised soy products are not traditionally fermented and are not, therefore, a super food. These soy products are usually a waste product of the American soy oil industry and rather than offering benefits for your health, they provide food technologists with huge opportunities for profit.

These ‘modern’, non-fermented soy products are obtained using extreme heat and pressure, chemical solvents, strong acids or strong alkaline substances, extrusion and other harsh methods: technological marvels but not without drawbacks. These modern waste products can contain harmful substances as a result, such as nitrosamines (from nitrate created by combining acids with high temperatures during manufacture: carcinogenic), lysinoalanines (cross-linking between lysine protein and alkaline: renal failure), heterocyclic amino acids (through high temperature extrusion and pyrolysis, which is decomposition at elevated temperatures: carcinogenic), excitotoxins (glutamate and aspartate are formed through hydrolysis of soy proteins: harmful effects on the brain and behaviour), chloropropanols such as 3-MCPD and 1.3-DCP (created by alkaline hydrolysis: liver cancer), furanones (by cooking at high temperatures: mutagen), hexane and other solvents, such as acetone, benzene and chloropropham. These soy products are junk food!

Soy is not, and never has been, an Asian food

The health link between soy and Asia is not based on fact. Soy was never an Asian food. Until the Second World War, Japanese, Chinese and Asian people only occasionally included soy in their diets. After that, the Japanese were forced to adapt to the American diet. GM soy, produced using American food technology, was introduced compulsorily and consumed on a massive scale, mainly in the form of oil.

The former Indonesian president, Sukarno (1945-1967), warned that his compatriots “were no tempeh nation”. During the Dutch occupation, tempeh caused a furore among the poor population of the country, as Indonesians had eaten fermented coconut oil cake for centuries.