Roundup ready GM soy: impact on the environment and allergies

1. Soy is the largest cause of deforestation in the Amazon
2. Soy is one of the top allergens and intolerance to soy increases rapidly over time
3. Soy is Frankenstein food (Monsanto GMO)
4. Tofu is made from calcium sulphite or magnesium chloride: not the sexiest ingredients

1. Soy and the deforestation of the Amazon rainforest 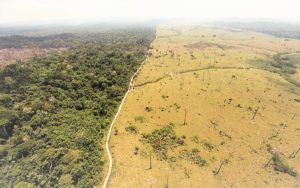 The cultivation of the soy bean is largely responsible for the deforestation of the Amazon rainforest and the extinction of animals and plants in the region. It also creates social problems in South America. The local population, mostly small farmers, are driven from their land. The Amazon rainforest and the priceless, biodiverse wooded savannah (Cerrado) are disappearing. Argentina, Brazil, Bolivia and Paraguay have all embraced Monsanto’s GM soy. It is expected that the demand will rise by 50 % by 2030, of which 60 % will be for cattle feed, 30 % for human consumption and 10 % for biofuels. With such a high percentage of soy being grown for cattle feed, livestock remains the biggest cause of deforestation worldwide.

In Brazil, five million farmers are currently fighting back against Monsanto’s malpractices. There is a claim of $ 7.5 billion hanging over Monsanto. In 2012, the Brazilian farmers won the first battle.

0.5% to 3% of the world’s population is allergic to soy. Soy is one of the top allergens and it is rising up the list every year. More and more experts are attributing this increase to monocultures and to genetically modified soy (GMO). Several studies have also pointed to the link between the introduction of GM soy and the rise in soy allergies and intolerance.

Today, the vast majority of the world’s soy beans are produced by Monsanto. ‘Roundup ready GM soy’ is genetically modified soy that can be sprayed with the herbicide roundup and survive while all the plants around it perish. Roundup ready GM soy represents 95 % of all soy in the U.S. and is mainly produced in Argentina. Since 1995, Europe has been importing Monsanto GM soy for livestock. But Monsanto soy is harmful to humans, animals and the environment. Irresponsibly large amounts of glyphosate-based herbicide is used for the roundup ready soy. Glyphosate is, among other things, responsible for deformations in the embryos of chickens and frogs. Professor A. Carrasco showed this through comparative studies that looked at other areas where glyphosate is sprayed. Cargill (Provamel and Alpro), Syngenta and Monsanto are trying to make us believe that GM soy can be socially responsible. Many organic organisations and nature associations do not share this view. And nor do we.

Allergies usually appear immediately and can be checked using an IgE test. Intolerances occur over time and can be detected through IgA, IgG and IgM tests. Intolerance to soy is more common than an allergy to soy.

The majority of all soy in the world is GM soy. The world leader in the product, Monsanto sells GM soy seeds that can only develop into soy once. Also known as Frankenstein soy, it is resistant to the toxic herbicide glyphosate. Everything is sprayed with this poisonous herbicide and the only plant that survives is Monsanto soy. GM soy is not the same as natural soy. GM soy cannot multiply. GM soy contains more oestrogen-like substances (isoflavones) than natural soy: bad news for women who wish to become pregnant. And also bad news for men: GM soy lowers testosterone levels more than conventional soy. Plus GM soy contains less protein than normal soy.

4. Tofu is made with calcium sulphite or magnesium chloride

To make tofu, the Chinese traditionally use gypsum, better known as plaster of Paris, to coagulate soy milk. Its main component is calcium sulphite. The Japanese prefer nigari, better known as Epsom salts, which mainly consists of magnesium chloride. Tofu is thus enriched with calcium or magnesium. The original soy bean itself has low calcium and magnesium content.