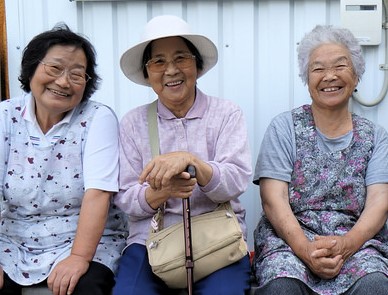 Okinawa is an archipelago south of Japan with 1.2 million inhabitants and an American army base. The Americans fought fiercely in World War II. Yet it is where the most, most active and happy 100-year-olds live. Because healthy aging fascinates people more and more, American and Japanese scientists have studied this phenomenon in depth for 25 years (from 1975 to 2000) in the well-known ‘Okinawa 100-year study’. Their book ‘The Okinawan Programme’ showed that the 100-year-old Okinawans had a slender, lithe body and strong bones. They had smooth, young arteries, low cholesterol and homocysteine levels and low risk of cardiovascular disease. They had little chance of developing hormone-dependent cancers such as breast, prostate and colon cancer. They had a sharp mind and hardly had dementia (3 times less at 85-90 years). They had healthy sex hormone levels and survived the menopause without any problems. They looked ‘youthful’, were energetic and had clear eyes.

1) They had a strong social network and strong family ties
2) They were stress resistant and could cope better with time pressure through meditation
3) They consulted Eastern and Western medicine
4) They got plenty of exercise
5) They ate little and healthy (whole grains, many and varied vegetables, enough fruit, little fish and hardly any dairy) 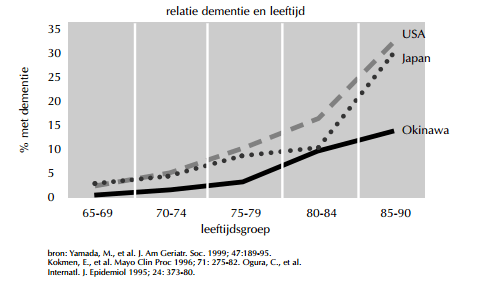 Immortality such as the eternal youth and health of the Okinawans is a subject that has made people fantasize for years. James Hilton wrote in his fiction ‘Lost Horizon’ his depiction of ‘Shangri-La’. His book was made into a movie in the 1930s and became an instant classic. Hilton’s Shangri-La is a peaceful and wondrous paradise, accessed through a gate, in the highlands of Tibet. Shangri-La was the land of the immortals, the peaceful paradise. Average life expectancy is expressed in centuries and not in decades. But the residents who leave it shrivel and age in minutes.
The Okinawans may not have eternal life, but they manage to increase their chances of 100 years of health. The Okinawas seem to have found the key to 100 years of happiness. “In ancient times, people lived to be over 100 years old, remained active, and did not become deficient in their activities.” (From Nei Ching Su Wen, the Yellow Emperor’s classic book on internal medicine, written circa 2600 BC)

Just like the Okinawans, a healthy body works holistically. Ours too. This means that the body functions as a whole and can regulate itself provided we provide it with the necessary basic nutrients and protective substances. This condition is very important and yet it is gradually being recognized more and more.