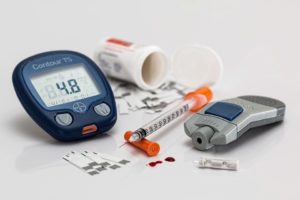 Extra virgin coconut oil can reduce hypoglycaemic attacks, hunger pangs and snacking during meals by contributing to stabilizing the glycaemic index. Adding coconut oil to your meals will contribute to maintaining a stable glycemic index.

People who suffer from diabetes often have issues with fats because their pancreas does not produce sufficient amounts of fat-digesting enzymes and their liver and gall supply less fat-emulsifying gall salts. As a result they have a harder time digesting fats, so that they often suffer from constipation and hard stools. People with diabetes should thus replace part of the other fats in their diet with extra virgin coconut oil. Because extra virgin coconut oil contains 60% MCTs and thus barely burdens the pancreas, liver and gall.

Several vitamins, minerals and other fat-soluble substances are better absorbed as a result of the better absorption of fats from coconut oil.
Patients who have insufficient control of their disease are extra vulnerable when it comes to the harmful impact of oxidized fats, which result from the effects of free radicals. If one does not carefully protect polyunsaturated fatty acids with vitamin E and carotenes, the number of oxidized fats in our body and brain will increase. Coconut oil contains less than 2% polyunsaturated fats, and as a result reduces oxidative stress. It is thus an intelligent fat in diabetes therapy.

The pancreas of diabetics releases insufficient insulin, or the cells have become insulin—insensitive, which means that they absorb insufficient amounts ofmedia glucose, which is the fuel cells need for energy. Coconut oil helps provide cells with energy. You will have more energy without requiring the intervention of insulin. (24)

Coconut oil even contributes to a better insulin function, reduced blood pressure and reduced amounts of protein in the urine of diabetics. (32)

Diabetics should say ‘no’ to transfats and refined oils 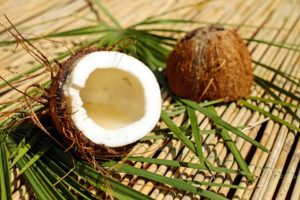 The real issue with diabetes is the deregulation of the fat metabolism and not the conversion of sugar. The sugar issue is a side-effect of the deregulated fat metabolism’, says Dr. Johanna Budwig. Transfatty acids and refined plays play a hugely negative role in the development of cardiovascular disease in diabetics. Diabetics should thus avoid re- fined and oxidized fats and oils even more than other people. Because transfats and refined fats prevent the proper functioning of the cellular membranes. As a result the glucose will have a more difficult time penetrating the cells. In other words: Too many transfats and refined fats have made the cells less sensitive to insulin, due to their negative impact on the cellular walls. By replacing unhealthy fats by healthy ones the cells will once again become sensitive to insulin.

The prevalence of diabetes is quite low in populations that consume saturated fats of coconut. A 1998 Indian study showed that the incidence of diabetes in Indians who gave up their traditional foods, including ghee and coconut oil, in favour of refined polyunsaturated fatty acids of sunflower and safflower oil is becoming alarming.

Studies in Polynesia have shown that there is a clear relation in population groups which migrate from their traditional foods, which are rich in coconut oil, to modern food that is rich in refined monounsaturated fatty acids, with the rise in diabetes. The Indians have started to develop diabetes due to refined foods. The incidence of diabetes is highest in ‘Americanized’ Indians.