Can coconut oil help with HIV and AIDS? 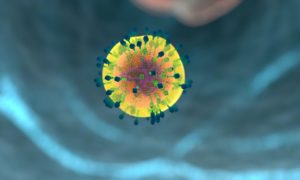 Millions of people worldwide are infected with HIV or suffer from AIDS. Does a cock- tail of toxic medication provide the solution? Not very probable. The virus’s unknown properties make it very difficult to combat HIV. Healthy nutrition and extra virgin coconut oil may have the potential to combat HIV on the one hand, but they can certainly alleviate the symptoms and side-effects of AIDS on the other hand.

HIV can be combated by coconut oil in the same way that coconut oil is effective against other bacteria and viruses. Recently there was a lot of commotion and re- search about how the human herpes virus 6A (HHV-6A) can collaborate synergeti- cally with the HIV virus during attacks on the immune system. This mainly happens due to the reduction of a specific type of lymphocytes (CD4) and the destruction of the lymph nodes. A study conducted by Knox and Carrigan in Wisconsin revealed that the most important form of this virus can be found in the lymph nodes of all HIV-positive patients tested. (12) Luckily HHV-6A is one of those viruses, which can be destroyed by the MCTs or middle chain fatty acids, found in coconut oil.

‘Research reported that coconut oil has an antiviral effect and can reduce the level of viral infection in HIV-positive patients. The positive antiviral effects could not only be attributed to the lauric acid monoglycerides, but also to the coconut oil itself. Coconut oil is a cheap instrument against the HIV virus. (13)

The recommended therapeutic quantity of coconut oil is 3.5 tablespoons a day, which is the equivalent of half a coconut. Coconut oil does not only help combat infections in AIDS patients but will also ensure that they can maintain their weight easier. Coconut oil also ensures that malnourished patients can regain their target weight without leading to excess weight. So coconut oil can also be an important food supplement during therapy. It is easily digested, provides energy almost immediately, improved the intestinal function and can be easily used in all types of recipes.