Trans fats: what are they?

French and German food technologists around 1900 developed a method to extend the shelf life of polyunsaturated fatty acids (PUFs) as found in soya, fish, sunflower and corn oil from a number of months (refrigerated) to a number of years (unrefrigerated) so that they could be used in the manufacture of cookies, etc. They wanted to make vegetable oil resemble butter, which was much more expensive. They wanted to turn a liquid vegetable oil into a firmer fat, which could be used as a spread. At the time an opponent already referred to margarine as ‘plastic butter’ (Crisco fat by Procter & Gamble). They wanted to increase the melting temperature of vegetable oils so that they could be used more in the processing industry of cookies and ice-cream. So how did they achieve this?
The starting point is usually a refined oil, which has already been stripped of its essential nutrients. This refined oil is then overheated (between 150° to 200°) and nickel (platinum, aluminium or copper) is added as a catalyst. It is then partially or wholly hydrogenated (hardened). The latter process means that the missing hydrogen atoms are added under pressure and bound with the oil’s carbons. During this process stable ‘transfatty acids’ are created, with a structure that is found nowhere in nature, and which does not belong in our body. In nature double alloys occur, especially in the cis-structure, whereby the hydrogen atoms are positioned on both sides of a double alloy (like a V). Unfortunately these cis- structures turn into trans-structures under pressure and due to the partial hardening of the PUFs. The hydrogen atoms are now on the opposite side.

If we start using these margarines and other partially hardened fats, these monstrosities will start to become part of our cells and they will also radically influence our cellular functions. (52) They undermine the integrity of our cellular membranes in our body. They take the place of healthy fats in cellular membranes. They are not ‘recognized’ by our body and disturb the absorption of nutrients as well as the release of waste, due to a dysfunctional cellular membrane. Moreover they also distort the natural conversion processes of essential fatty acids such as linoleic acid and alpha-linoleicacid and have an impact on blood viscosity, cholesterol levels and the blood vessel walls. In 1958 Ancel Keys already stated that the partial hardening of fats could cause cardiovascular disease due to the transfats in these products.
J. Aron of the University of San Francisco compared the transfats in our body with sand in a Swiss mechanical watch. The watch starts to slow down until the excess sand will make it stop. (65) In other words: transfats will slowly but surely make us ill. Udo Erasmus is very clear: ‘eating 60 mg of margarine or baking fats is twice as toxic as all the other food that we eat on a daily basis’ (181). 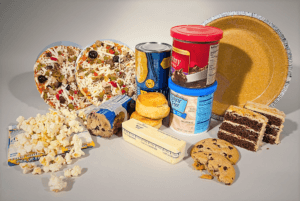 Almost all cookies, baking products such as cheap croissants, waffles, ice-cream, crackers, dressings, vegetarian burgers, frankfurters, crisps, French fries, muffins, donuts, chocolate chip cookies, popcorn, candy and margarine contain transfats. Transfats are omnipresent in catering and restaurant food (company, school, hospital and airline catering). For example 1 portion of chicken nuggets contains between 8 to 18 g of transfats and 1 portion of French fries between 5 to 12 g. The fats in French and Belgian fries can contain up to 46% transfats.
Schoolchildren will consume incredible amounts of transfats in their snacks (such as cookies, bars, crisps). These will undermine their sexual and fertility performance in the long run, and also their chance of having healthy babies in the future. Next to this 80% of children’s foods contain refined fats (chocolate paste), refined carbohydrates (white bread) and refined sugars (cookies). Transfats are always an ingredient when the packaging mentions the following: ‘wholly or partially hardened/hydrogenated fats’. At present transfats don’t even have to be mentioned on the packaging in most countries. But change is abreast. The Canadian authorities consider them to be extremely harmful; since the 90s the Netherlandshas been imposing strict limits about the percentage of transfats in margarine and since 2004 there are restrictions regarding their use in Denmark. Only after a scientific committee stated that there simply was no safe level of transfats the US took limited measures with regard to the obligatory mention of transfats on labels from 1.1.2006. Israël will probably be imposing obligatory mentions on labels from 2007. Europe is currently reviewing the matter.

1. They break down the delta-6-desaturase enzyme, which complicates the necessary conversion of our omega-3 and omega-6 fatty acids (alpha-linoleicacid and linoleic acid) into prostaglandins (important hormone- like substances) (73) (74).
2. They prevent the functioning of omega-3 and omega-6 fatty acids which might lead to hormonal, circulatory, immunity-related, concentration and memory problems (71).
3. They raise cholesterol levels (57) (they only increase ‘bad’ LDL and lower ‘good’ HDL), increase the adhesiveness of blood platelets (71) and increase the Lp(a) risk factor, which increases the general process of atherosclerosis (‘hardened arteries) (73) and thus the risk of contracting cardiovascular disease (70).
4. They reduce the immunity (reduction of B-cells and increase of T-cells) (73).
5. They increase the incidence of allergies, such as the development of asthma.
6. They increase the amount of insulin in blood, which indicates that the cell’s insulin receptors become less sensitive (73). As a result blood sugar levels will increase, the pancreas is overburdened and the risk of age-related diabetes increases (66). The red blood cells also seem to react less well to insulin. (71) Transfats also contribute to the incidence of age-related diabetes.
7. They prevent absorption of vitamin K, essential for developing strong bones.(66)
8. They prevent the build-up of muscular tissue and may bring about protein shortages. (182)
9. They disturb the normal metabolism of sexual hormones and contribute to prostate and breast cancer (70), to pre-menstrual syndrome and menopausal complaints.
10. They reduce the testosterone levels in men and contribute to producing deviant sperm cells (71).
11. They threaten the normal function of the reproductive organs and human fertility. (53) 12. They contribute to a decrease in vision (67) (71).
13. They reduce the production of breast milk (54) and the quality of this milk. (73)
14. They cause lower birth weights (55) and are transmitted to the foetus through the placenta and breast milk. Normally the percentage of transfatsin breast milk should only amount to 1%, but if the mother consumes more transfats, this can rise to 17% (71).
15. They impede children’s’ growth (56).
16. They reduce the transfer of stimuli between nerve cells, the distribution of neuro- transmitters and the global functioning of the nervous system, which in turn results in a higher risk of ADHD, depression, Alzheimer’s disease, etc.
17. Moreover transfats are encapsulated in our cellular membranes and they tend to impede the membrane’s normal function, due to their divergent structure. As a result they contribute even more to the aforementioned pathologies.

In ruminating animals such as cows, sheep and goats, naturally transfatty acids are present in a very limited measure (2 to 5%). If animals ingest transfats in their food then their fat may contain more chemically formed transfats. The natural transfats often deviate from chemically formed transfatty acids due to their behaviour and the place that double trans alloys hold in the fatty acid chain. In ruminants this is often in 11th position. In partially hardened fats usually in 9th, 10th or 12th position.
Transfat specialist Mary Enig is justified in calling the latter ‘molecular monstrosities’. As is the case with vegetables, fruit, cereals, herbs and nuts it is recommended to alternate healthy fats and extra virgin olive oil.