Research and science about perilla

Perilla has been used in Japanese herbal medicine for years in the Japanese traditional Kampo medicine for kidney diseases. In this study in mice, Perilla was able to decrease IgA levels, which indicate allergy and inflammation. Perhaps the researchers concluded this is due to the improvement of the immune system of the intestinal wall. due to the synergistic effect of Perilla omega 3 fatty acids and its rosmarinic acids.

Mice were given either Perilla oil or Safflower oil for 2 months. Perilla oil was able to suppress the promoting allergic intermediates that safflower oil could not. This study suggests that the fatty acids in Perilla are effective in reducing allergic hypersensitivity that normally occurs immediately. 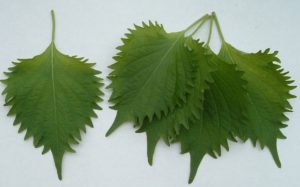 Perilla oil naturally contains rosmarinic acids, a polyphenol known for its antioxidant and anti-inflammatory properties. This study investigated the relationship between Perilla with rosmarinic acids and seasonal allergic rhinoconjunctivitis (SAR) in humans. After 21 days, the subjects experienced significantly less stinging eyes, less stinging nose and less watery eyes. The IgE concentrations in the blood were also lower and the biomarkers in nasal rinses were improved (neutorphils & eosinophils). The test subjects had no side effects.

This study published in 2000 compared Perilla oil with corn oil in a small group of people with asthma. The results indicate that Perilla oil suppresses certain negative biomarkers for asthma and is therefore useful in the treatment of asthma.

The influence of Perilla was tested in this study on the non-specific functioning of the immune system (phagocytosis). The conclusion of this study was that Perilla had natural substances that could increase the resistance both in the lab and in the real world and stimulate phagocytosis (phagocytosis is the ability to destroy bacteria and harmful substances). The increase in resistance was seen almost instantaneously, becoming very apparent after 1 week and highest after 4 weeks.

This study showed in humans that the ingestion of Perilla oil, rich in alpha-linolenic acid and other components, could significantly reduce the risk of recurrent oral mucosal inflammation.
(RAS, recurrent aphthous stomatitis). After 4 months the alpha-linolene levels in the blood had already increased significantly

This study in rats examined the relationship between diet and the production of thromboxane A2. Thromboxanes A2 is an important initiator for possible formation of blood clots. After already 7 days, Perilla oil was able to improve the nitrogen balance and reduce pro-inflammatory cytokines and thrombaxane A2 production of the platelets. Perilla improved the general nutritional balance of rats with diabetes.

Perilla has an anti-inflammatory effect on the intestines

Colitis, Crohn’s disease and all kinds of inflammations of the intestines can be sensitively suppressed by alpha-linolenic acid from Perilla. According to this study, Perilla is said to protect the intestinal wall by inhibiting pro-inflammatory leukotrienes. Inflammatory leukotrienes are thought to be responsible for all kinds of inflammation and for allergic reactions.

Perilla is a helping hand for colitis. Better than EPA or DHA.

This animal study suggests that Perilla can reduce damage in colitis (inflammation of the gut) and that Perilla does this better than EPA or DHA.

Perilla has an anti-inflammatory effect and helps prevent tumors

The effects of adding either Perilla oil, soybean oil or safflower oil to a diet was studied in female rats. The number of tumors per rat was significantly lower in the Perilla group.

Colon cancer and kidney cancer were significantly lower in the Perilla group.

The effect of Perilla oil was investigated in relation to colon cancer in rats. Here too, the risk of colorectal cancer in the Perilla group was significantly lower than in the other groups. This study suggests the anti-cancer effect of Perilla oil. Perilla would increase the resistance of the intestines and thus make the intestinal wall less sensitive to cancer promoters.

In this study, the scientists set out to investigate the protection that various fatty acids would provide in rats when colon cancer was provoked with azoxymathane (AOM). Testing was done with safflower oil, Perilla oil, olive oil, and Perilla with olive oil. Cancer development (ACF, aberrant crypt foci) was up to 60% lower with Perilla oil and was lowest at the highest dose. They saw significantly fewer indications (biomarkers) in the intestinal cells that would lead to cancer. They also saw an increase in omega 3 values in the cell membranes of the intestinal wall cells as well as a decrease in the cancer-negative PGE2 values. The researchers concluded that Perilla oil may help prevent colon cancer.

Perilla has a cell-inhibiting effect in cancer tumors

Luteolin, a component of Perilla, tested positive for inhibiting cell growth in cancer tumors. The researchers concluded that a daily intake of Perilla may have a positive effect on tumor growth.

Animal and human studies suggest that alpha linolenic acid (linseed/perilla) alone helps in the fight against breast cancer. The French researchers also showed that ALA was significantly better than DHA. The greater the consumption of ALA, the lower the risk of breast cancer. 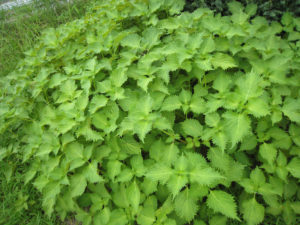 Perilla prevents blood from clumping together without increasing the risk of brain haemorrhage.

Mice got 60% of their calories from either refined palm oil, pork fat, canola oil, soybean oil, safflower oil, perilla oil or fish oil. After 19 weeks, blood sugar and body weight were significantly higher with soy, palm, rapeseed and pork fat than with Perilla and fish oil.

In rats and mice, the behavior of rats in this study was better than those with safflower oil. Learning ability and eye function were also better with Perilla. Perilla oil could also reduce the risk of cancer, allergies, hyperactivity, high blood pressure, and slow down aging. The authors suggest that a good ratio of omega-3/-6 is important and that Perilla can make a positive contribution. Alpha-linolenic acid in Perilla oil improves general health and reduces the risk of many lifestyle diseases.

Perilla and its active components are well absorbed

This study concluded that the absorption, metabolism, breakdown and excretion of Perilla and rosmarinic acids from Perilla are good in humans. For example, the absorption, conjugation and methylation of rosmarinic acids proceeded according to the uptake, with a small part even breaking down into other components such as CAA, FA and COA. These were then rapidly excreted in the urine.

Perilla is an anti-depressant

In a forced swim test, mice with Perilla and an active ingredient from Perilla ‘apigenin’ were shown to improve behavior and biochemical results during strenuous exercise. Dopamine and serotonin were used as biomarkers. These results suggest Perilla’s antidepressant value, the researchers said.

Rats fed either safflower oil or Perilla oil for 2 generations had significantly clearer thinking and better discernment with Perilla. The poorer learning performance of the safflower oil group was mainly due to the inability to correct mistakes in the learning process. The number of synaptic connections in the safflower oil group was 30% lower than in the Perilla group. These results suggest that the type of oil we ingest contributes to the positive formation of synapses in the rat hippocampus. More synapses mean better learning ability.